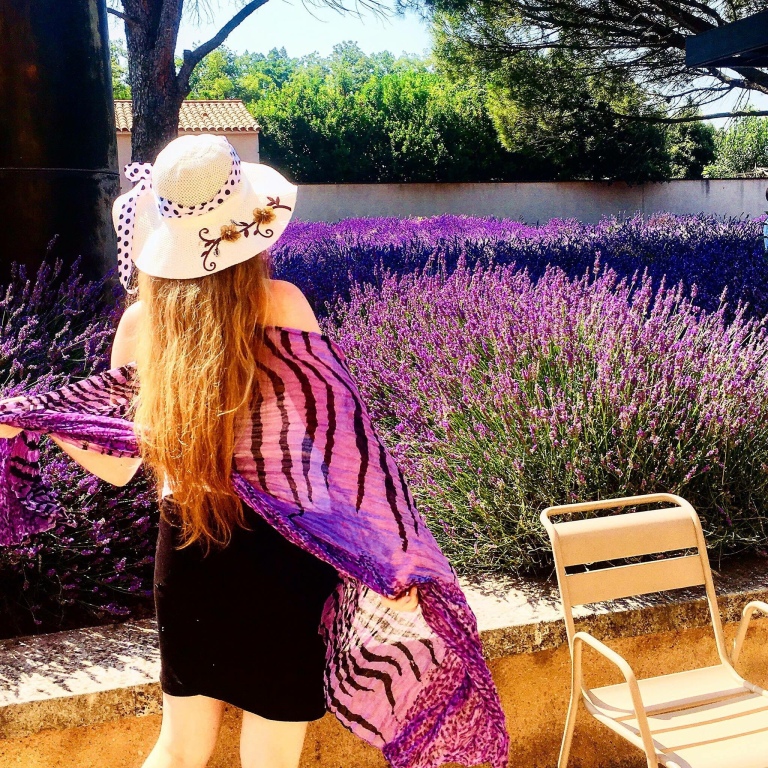 We had a lovely visit to the lavender fields in Provence, France! Currently living in Marseille, we rented a small car and drove out to the Musée de la Lavende. It was boiling hot, but the sun was shining and our little French automatic had semi-cold air conditioning. The drive north of Marseille was beautiful, full of whitewashed houses, rolling hills and bubbling streams. 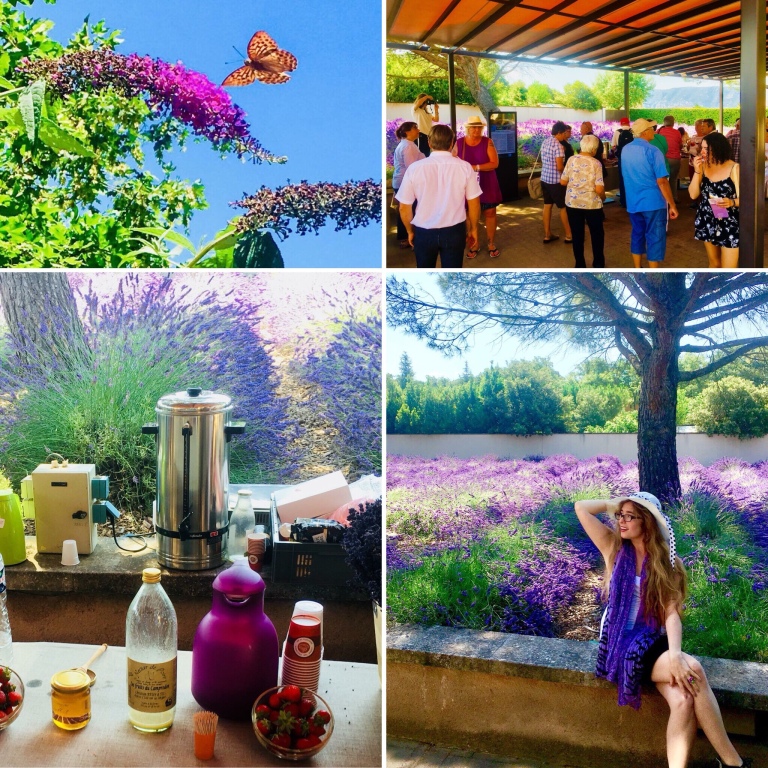 💜🦄💜🦄💜
The Museum greeted us bursting with lavender, touring retirees, and an children huddled around an old lavender-cutting machine. The entire field smelled of soft flowers and honey. We heard the faint hum of bees as they wriggled through the overflowing lavender bunches, and mingled with some people who were visiting as part of a guided tour. We intently listened to the explanations of the lavender infused wines, tried samples of cheese and salami and nibbled on little red berries. We smelled the lotions and potions in the gift shop. The bars of soap were light purple with a deep, heavenly scent. We sat on the romantic bench in front of the purple field, admired the rows of swaying lavender bunches in front of entrance, and walked up and down the windy staircases. We smiled at the happy employees, whispered to the bumble bees and sniffed the lavender essential oils. It was hot and we were ready to leave.

We made our way to the Abbaye Notre-Dame de Sénanque. The Sénanque Abbey was only 20 minutes away, and the drive was scenic and colorful. We arrived as part of the hundreds of tourists who also had this grand idea of visiting the Abbey on that very same Tuesday afternoon. One of the roads (that Google instructed us to take) was blocked off, so we had to park up the hill with the other visitors, who were slapping on sunscreen and puffing on cigarettes.

💜🦄💜🦄💜
Harrison followed the path with the tourists and I walked the other direction, past the tiny blockade and up the first pathway that Google had showed. I hopped over tree branches, hoping that I hadn’t disturbed the wasps or the snakes. I stayed on the footpath under the dark shade of the trees, tiptoeing by the wild lavender that had spread from far the field. The Abbey was tiny in the distance, humble and beautiful, surrounded by purple fields on all sides. The tourists – small specs from my high spot on the hill – blended together as they trotted down the official path. Next to my feet were crunchy grasses and happy flowers, aligned along a bitty dirt road made for two wheels. As I walked past the shade of the trees, I was blinded by the sun and the noisy breeze. I was the only person for a good 800 meters and it was glorious. Quiet, peaceful, lovely. The honeybees whizzed past me, hauling their heavy sacks of pollen. The birds chirped faintly, probably commiserating about how hot it was outside. More bees. Lots of bees. The bees were next to me and above me, in front of me and behind me, whizzing through my hair and around my skirt. I was clearly in their way as they hummed back and forth from the lavender fields and to their hives – THAT WERE RIGHT BEHIND ME. Anddddd I went back the way I came, swiftly this time, ducking further with every step to avoid being a bee-blockade. I am unreasonably terrified of these tiny creatures, so naturally, I army-crawled out of the landing zone and hauling ass out of this beautiful escape, back to the puffing tourists, busy streets, and lack of bee hives. I was very glad to be on a paved road. I found my honey, who wondered if I had been attacked by a pile of twigs, and we followed the crowd down to the official entrance of the Abbaye de la Sénanque.

💜🦄💜🦄💜
The Abbey was built in the 12th Century by Cistercian monks, who had wondered over from the Ardèche River, a hundred miles northwest of the Abbey. The Romanesque architecture was sturdy and practical, but beautiful next to the contrast of the lush purple fields. In front of the church was a large section of pristine, well-protected lavender. The scent seemed to drift for miles. We wandered into a separate open field, and then into the gift shop where they sold lavender everything: sprays, oils, vinegars, sweets, soaps, liquors and perfumes. We had a bit of a pedestrian traffic jam in front of the church, and we joked about how there should be two paths: one for the walkers, and one for the photographers.

💜🦄💜🦄💜
The Asian tour groups were coming our way. I always think that I’m in a good spot when the Asian tour groups show up – this place was pretty amazing, after all. The beautiful young women – dressed to the nines in long flowing gowns, sparkly jewelry and red lipstick – strutted ahead of their boyfriends, who were lugging the camera gear, dripping of sweat and holding beautiful diamond encrusted heels to hand to their Insta-famous girlfriends right before taking hundreds of clicks. There were dozens of gorgeous women – and their exhausted, sweaty partners – trailing behind experienced tour guides, who were explaining the Abbey’s history in multiple languages. 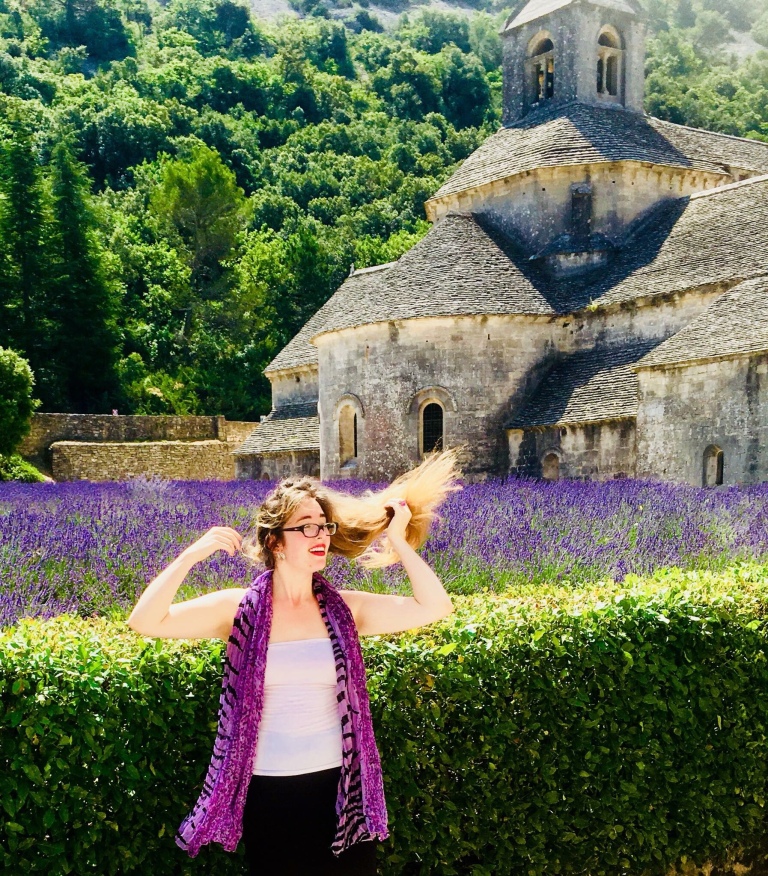 We learned that the east end of the Abbey’s church faced north, causing quite the uproar amongst the monks, but there simply wasn’t enough room for any other layout. The monks have a few rooms that are open for rent if one desired a peaceful – yet touristy – retreat.

As we walked to our car, we saw butterflies gathering nectar and hungry birds catching insects. Our car was steamy hot (including the steering wheel) and we got sufficiently lost on the way home (no reception), but we didn’t worry. There was only one road, and it did, indeed, lead us back to Marseille – just in time for dinner.

What a lovely afternoon!

Have you seen the Lavender fields in France? Which cities did you visit? Tell us below!