So nice to be back in the Deutschland. No matter where I am in Germany, it seems that the weather is always overcast with a slightly-higher-than-normal chance of rain. 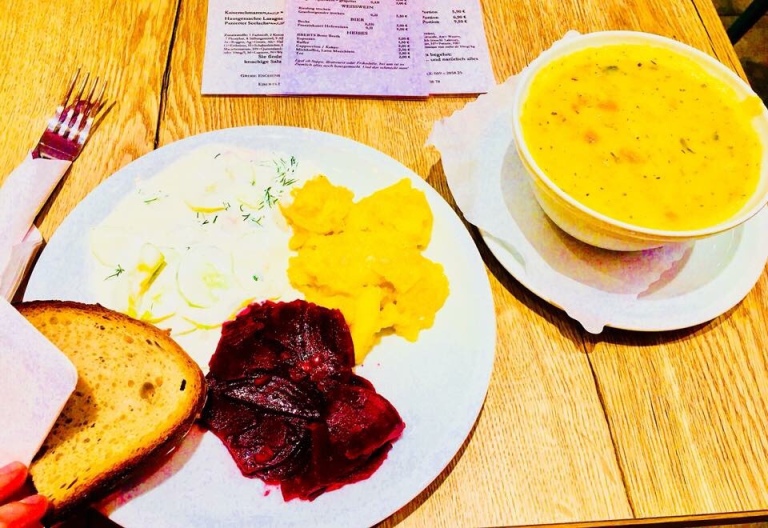 I arrived in the morning and I found the Alte Oper Frankfurt – the original opera house built in the 1880’s, destroyed in WWII, and currently being used as a concert hall after the restoration & reopening in 1981. It was quite beautiful, surrounded by a large, bratwurst-smelling plaza and a swooping fountain. I had an interesting few minutes there – I found the greatest statues, almost got run over by three different bikes (I wasn’t even in the Fahrrad Linie/bike lane!), and was asked by two German teenagers to fill out a survey/rate my satisfaction with the city of Frankfurt as a whole. I didn’t stay long, as I’m fairly sure they were pickpockets haha. I ate a traditional German meal of potato soup, cucumber/beet/potato salads and bread…and of course, bratwurst!!! However, I ate the Brat too fast to take pictures 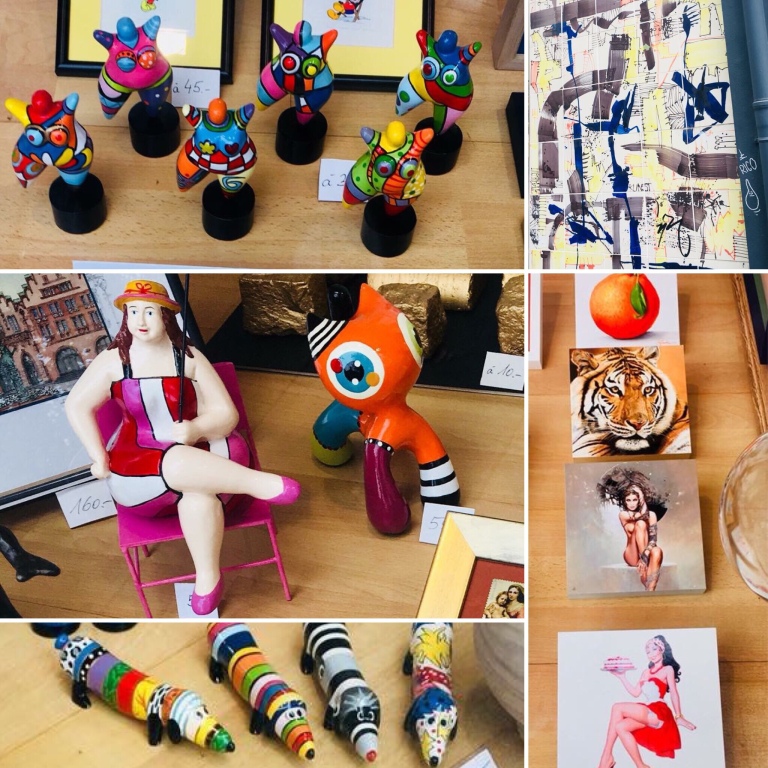 I went to Römerplatz, the busy and beautiful town square named after Römer: the iconic building of Frankfurt with a well-preserved facade that has been the city’s Rathaus (city hall) for 600 years. There were multiple souvenir shops and, of course, ice cream! I had a scoop of vanilla and a berry pastry. I explored the Historisches Museum Frankfurt, one of Frankfurt’s 12 museums along the riverbank, and enjoyed the fun displays of old Roman ruins attached to the outside walls.

I took the Free Walking Tour. The official title was the “Alternative Free Walking Tour,” because the group walked through the Red Light District and discussed prostitution and the drugs that used to run rampant within the downtown area. Currently, there are certain areas for businesses involving sex work, and they have recognized drug addiction as a disease, rather than a weakness. The same number of law enforcement officers assigned to arresting drug dealers have also been assigned to helping people manage or recover from their drug problems. We saw the house that is used as part of the “Eastside Project,” which is a house that is a warm, clean space where it is legal to shoot illegal drugs. As odd as this sounds, this space and the resources provided by the city have cleaned up the city’s homeless and drug population by 90% since 1994. Our guide explained that, instead of people being arrested for using drugs, they are either left alone or brought somewhere where they can receive care and rehabilitation. 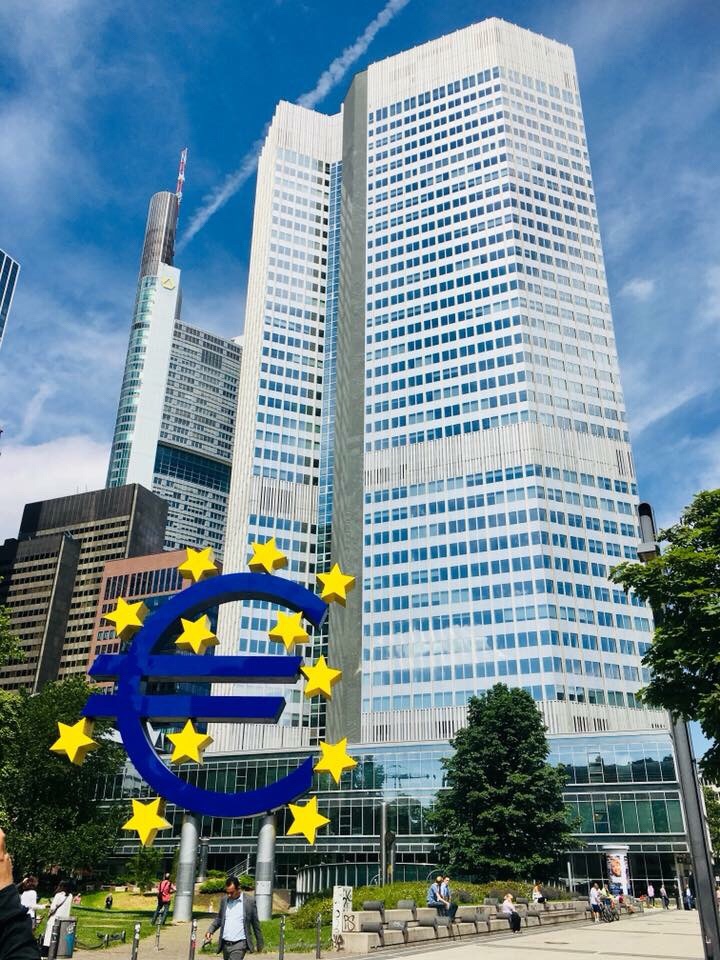 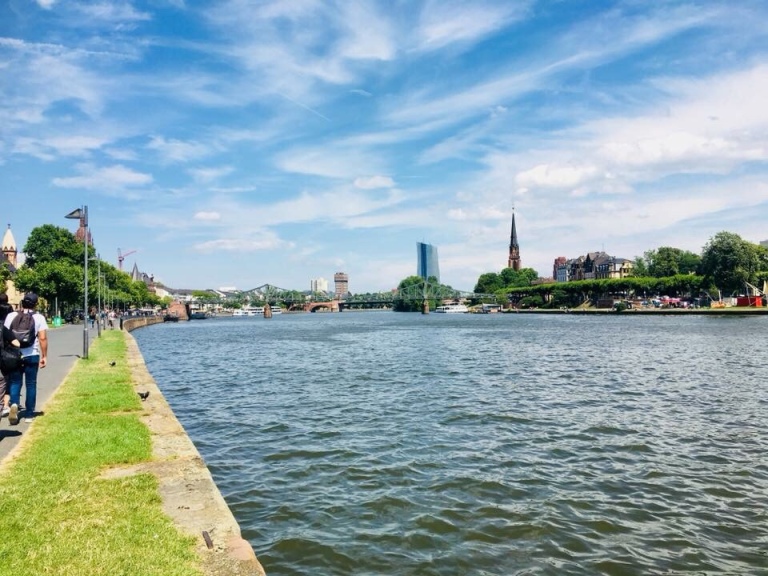 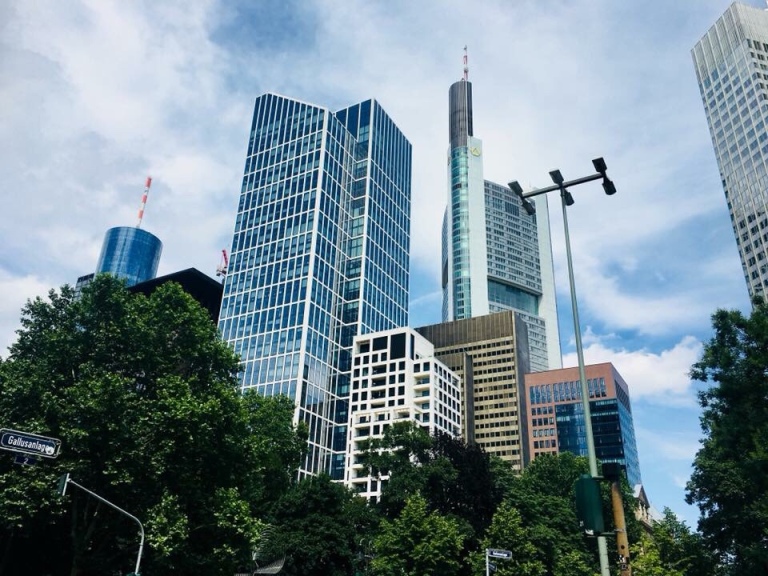 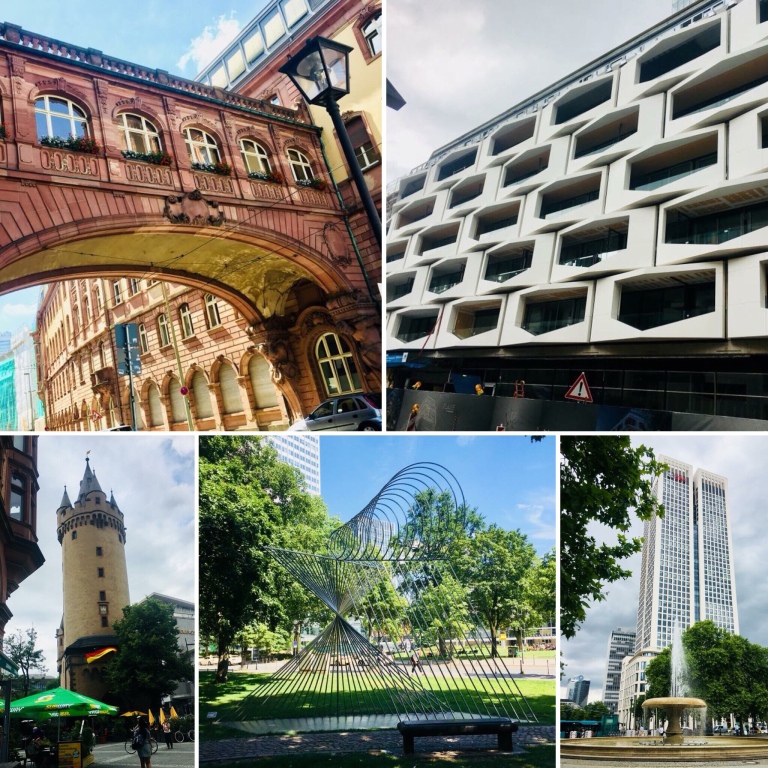 We saw the skyline with the seven bank headquarters all crowded next to one another, the Eiserner Steg Bridge crossing over the beautiful Main River, and Nitze Park. The name “Nitze” refers to the city of Nice, in France. Its meaning comes from the fact that this park being the only area in town (and all of Germany, I think?) that can grow plants found on the French Riviera. In fact, this is the only park that has wild-growing Mediterranean plants north of the Alps. We also found the statue of the Euro sign, an iconic symbol of Frankfurt, as this city is the home of the Euro. 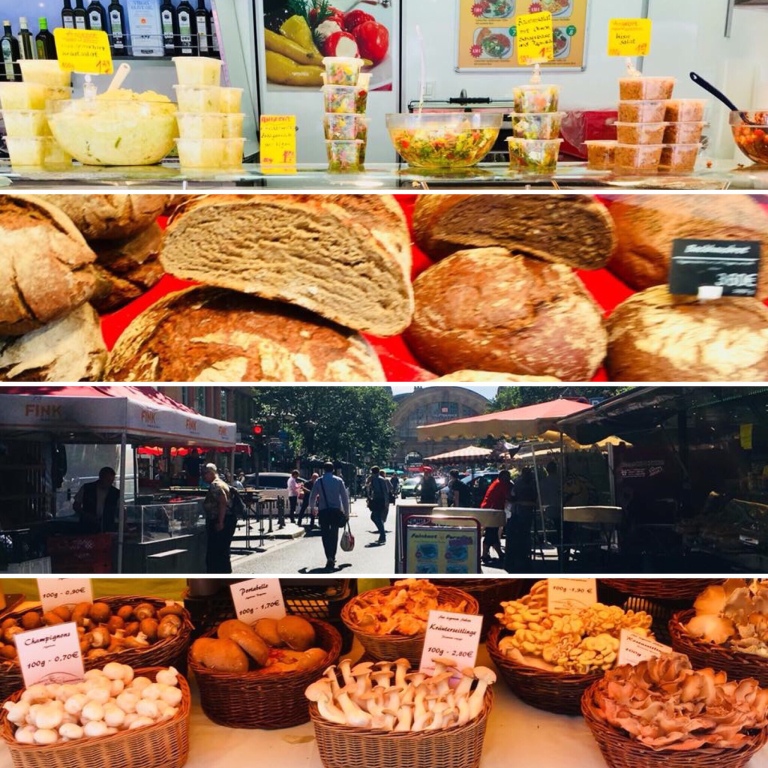 On my way to the Hauptbahnhof, I passed through a noisy farmer’s market, overflowing with berries, mushrooms, pickles, sausages and beer. I bought some spicy artichokes, raspberries, a salad and some Apfelschorle (apple juice and sparkling water) for the train ride. 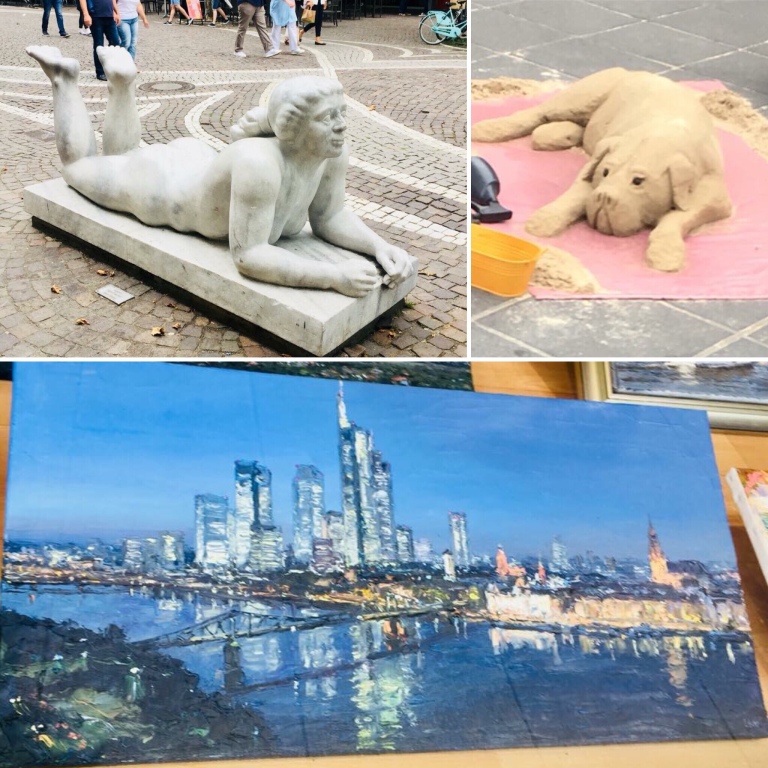 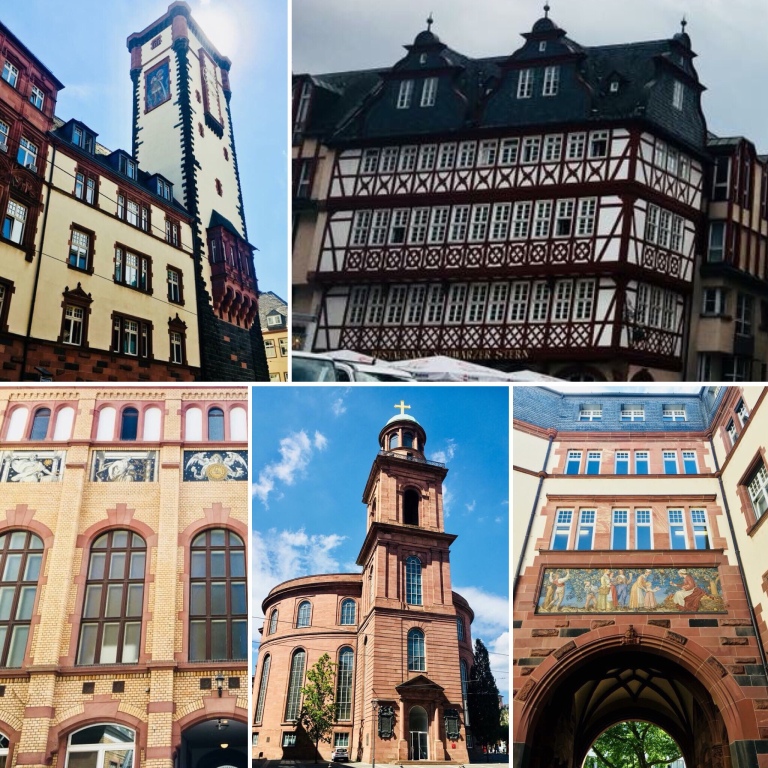 I had such fun and was so happy to be in the Mutterland again. Viel Spaß in Frankfurt…bis bald, Deutschland! 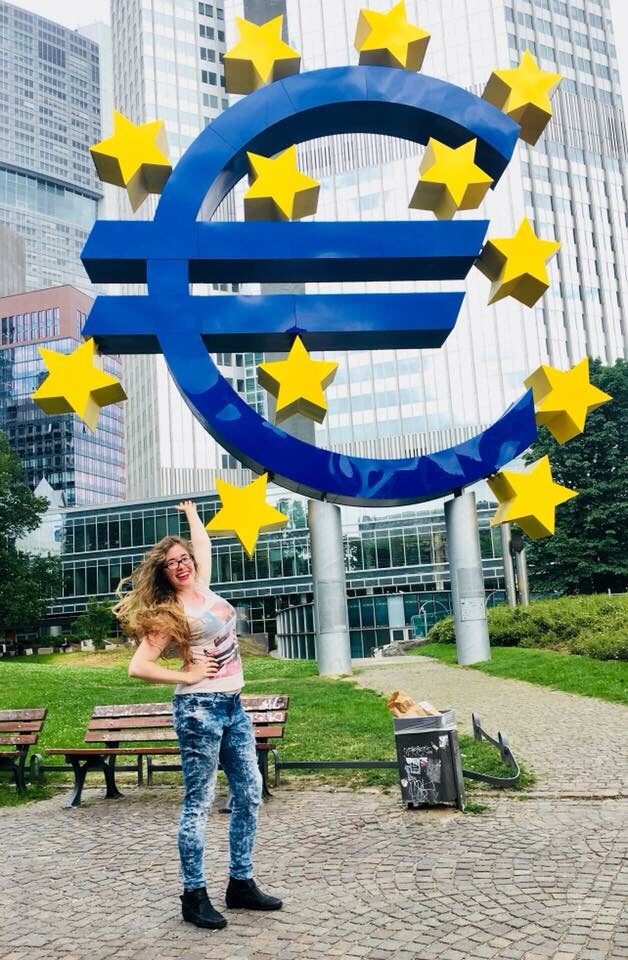 Have you been to Frankfurt? What was your favorite thing about this great city?