I arrived in Warsaw, Poland, on the train from Gdańsk, and it was dark when I got there, but it didn’t feel dangerous. It felt like a big city with lots of young people and bustling shops. You could tell they put a lot of effort into making this city friendly at night, as well as during the day. ❤️

I had a wonderful time in Warsaw. Poland is in my blood, so it felt good to experience it firsthand. Here are the highlights of my trip.

I stayed at an Airbnb with a mom and daughter, and their six (!!!!) cats. I love cats, so this was one of the best stays of my whole traveling life, lol. Nearly everyone I talked to in Poland had a cat, but I saw very few cats outside. 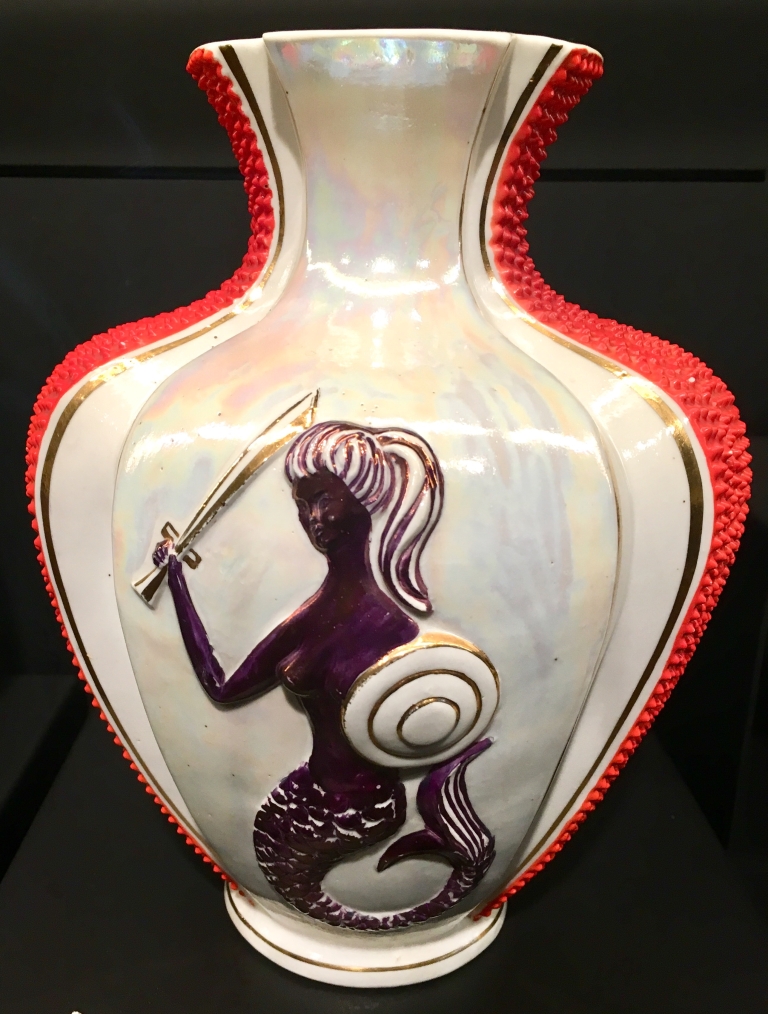 2. The National Museum in Warsaw

The next day, I went to the National Museum and saw all kinds of colorful clothing and paintings and jewelry and furniture and tapestries and important info about Poland’s history. It was just a few USD to get in, very affordable for the vast collections that visitors had at their disposal. 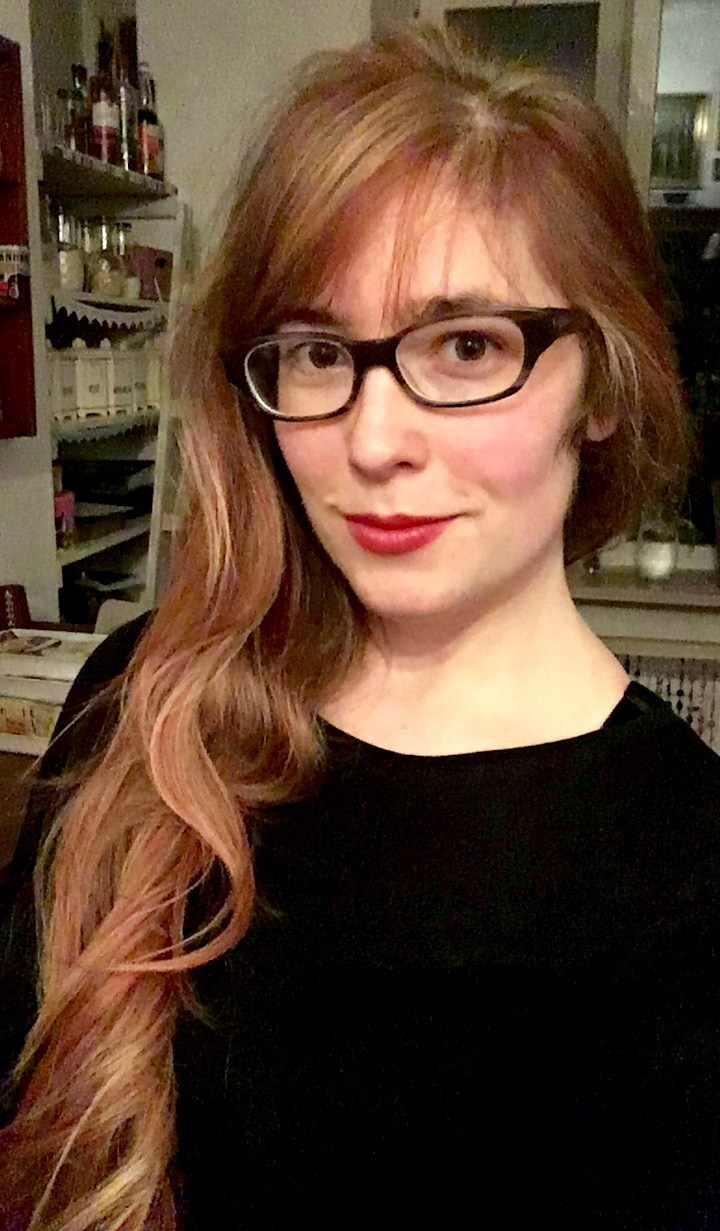 When I got out of the overwhelming (in a good way) museum, I headed over to the hip part of town to find a hairdresser. I found a salon that had a young woman to translate for me and a very sassy older stylist who said she’d color my hair reddish blonde.

I was there for three hours and she got my hair sooOoOoOooOoooooo tangled that I thought she was going to have to literally cut it all off, but she finally ripped it into submission so she could dry it and cut it. I wasn’t too happy…when I saw the color, I felt like an angsty teenage alien. I later grew to love it, but the shock of so much blue-red was quite jarring.

I ate at a beautiful vegetarian place that had the nicest people working there. Everyone working there spoke excellent English, and they had English menus. I was so impressed with the delightful variety of delicious veggie options. They had adorable chandeliers hanging from the ceilings, multiple plugs all around the room and lots of happy chatter from other customers.

Then, off to the little shops! At this point it was getting dark, so I headed for the big holiday market in the middle of town, and explored the stalls and Christmas lights!

Warsaw itself was very beautiful. I loved all the old buildings in the Old Town Market Square with Christmas decorations on them. The Museum of Warsaw, directly in the middle of the square, was much bigger than I’d expected. I only had an hour or so to explore it, which is usually plenty of time for a local museum – not including the Louvre haha – (for me…but I’m a fast museum explorer, lol). This one, not so much. It was also right in the middle of the town square with the Christmas lights and the wintery decorations and festive markets.

This main square was my favorite. Even though it technically wasn’t the “original,” it still looked fantastic. The city planners after the war had clearly put a lot of thought into recreating the buildings to look exactly as they did before they were knocked down.

Locals were busying themselves around the town, sipping hot drinks, buying Christmas ornaments and walking arm in arm. They were still having their fun Christmas celebrations – even during my January visit! haha

I really liked the little shops in Warsaw! I’m not one to spend a lot of money on tangible things, but I found plenty of affordable souvenirs and lots of sweets to expand my pants size. There were some lovely painters displaying their pieces along the pedestrian walkways, which were beautiful, as well as a large Christmas market. I bought stacking doll earrings and post cards. I saw these intricately carved rolling pins for making cookies, etc, and I wanted every single one.

No trip to Poland is complete without wholeheartedly gorging oneself on small, hot, flavorful dumplings, or as the Polish folks call them, pierogis. I got back to the Airbnb and fully enjoyed my six fluffy roommates sniffing my shoes and inspecting my bags. My host was very specific about how sneaky the cats were and how to put anything that was even mildly edible in the fridge, lol. I had stopped by the supermarket to bring home some pierogis for my partner, and I had to make sure they went right into the fridge. I almost forgot to put in there when I got back, and the 18 year old little kitty-foof reminded me how clever he was, despite his age, haha.

When I was picking the pierogis out at the store, I asked a nice young man what each one was. He laughed and explained what each of the flavors were and when they ate them. Whether they were for dinner or for dessert, they all looked delicious, and he made sure to explain what each variety was typically eaten with. I was SoooooOooOooO hungry!

The city walls were built in the 16th Century in order to keep the city safe, and they span the entire Old Town area. They are quite beautiful! They separate the Old Town from the New Town, and I really enjoyed the expansive brick and rust colors. It provided a beautiful backdrop to a city that saw so much destruction during WWII.

As for my Airbnb, I really enjoyed their house! It was so quaint with black and white pictures everywhere, and soup can labels splayed across the backboard in the kitchen. The cats were all over the everything, and they were so cuddly and friendly (this was the best). It was nice to feel so at home on the last stop of my trip. ( I spent 4 days in Kiev, 3 in Poznan, a day in Gdańsk, and then 2 in Warsaw. They were all beautiful!)

I was starting to really like my new hair color at this point, feeling a lot less like an awkward teenager with yam-colored hair, and more like a normal looking person, haha. 🙂

Warsaw was a happening place, with lots to see, eat and experience. I can see why people choose to live in Warsaw, as it has a small-town feel in a big city space with well-organized transit systems and a very diverse population of young people.

Warsaw was much different than I’d expected. The cold air kept everyone bundled up and drinking coffee or hot chocolate. All the windows were foggy and everyone had their heat on. The women were lovely and the men were very polite. Warsaw felt like a constant influx of beautiful people, old (slightly-) crumbling mansions and blueberry pierogis. Visit immediately 🙂

Thanks for reading, and happy travels! Don’t forget to subscribe 🙂

Here are some other pictures from my visit.

One thought on “My Nine Wonders of Warsaw”